What are Shadow Types?

Shadow: a part of ourselves that we avoid and try to hide.

At some point in our lives, usually when we were pretty young, we figured out that it was not okay to express certain parts of ourselves. Maybe Mom didn’t like it when we were bold about asking for something we wanted or, according to her, we were being demanding. Maybe Dad didn’t like it when we were hurt and crying. Or someone else who was important to us made it clear that it was not cool for us to shout with glee and jump up and down—basically, to be exuberant.

Of course, we had no way of knowing that they were the ones who had a problem being able to handle us. No. Instead, we assumed that the fault was ours: maybe we there was something wrong with us, or we weren’t loving enough or we just didn’t matter. Whatever sense we made of the situation, we formed some kind of negative conclusion about ourselves, some kind of false belief.

And then what did we do, in order to make sure that Mom or Dad or Whoever was still good with us? We did our best to stop acting in that way which was causing offense. We did our best to hide that undesirable side of ourselves. We put a part of ourselves in shadow. And then, to help ensure that this unacceptable part of ourselves wouldn’t sneak out, we became the opposite: If being loud was bad, we might have turned ourselves into the quiet one. If being assertive got us in trouble, we may have become more passive. If we weren’t liked for being exuberant, we may have found that we got rewarded for being reserved. In other words, we put the problematic, shameful part of ourselves in shadow and formed our personality around a different, more acceptable quality.

These various personality types, arising out of a way to cope with a rejected part of ourselves—our shadow—are what we refer to as Shadow Types. To learn more about all Twelve Shadow Types click here 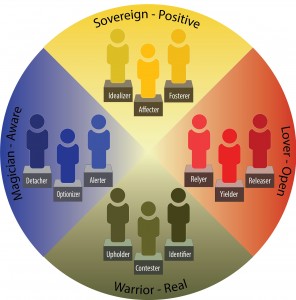 I highly recommend taking the Shadow Types survey and attending a Shadow Types training. Learning about the Shadow Types gave me a whole new way to understand the hidden dynamics of human behaviour. I have not only used this insightful knowledge to improve the quality of my life and my relationships, it has also helped me to empower hundreds of my clients, from private individuals and couples, to organisational leaders and their teams.